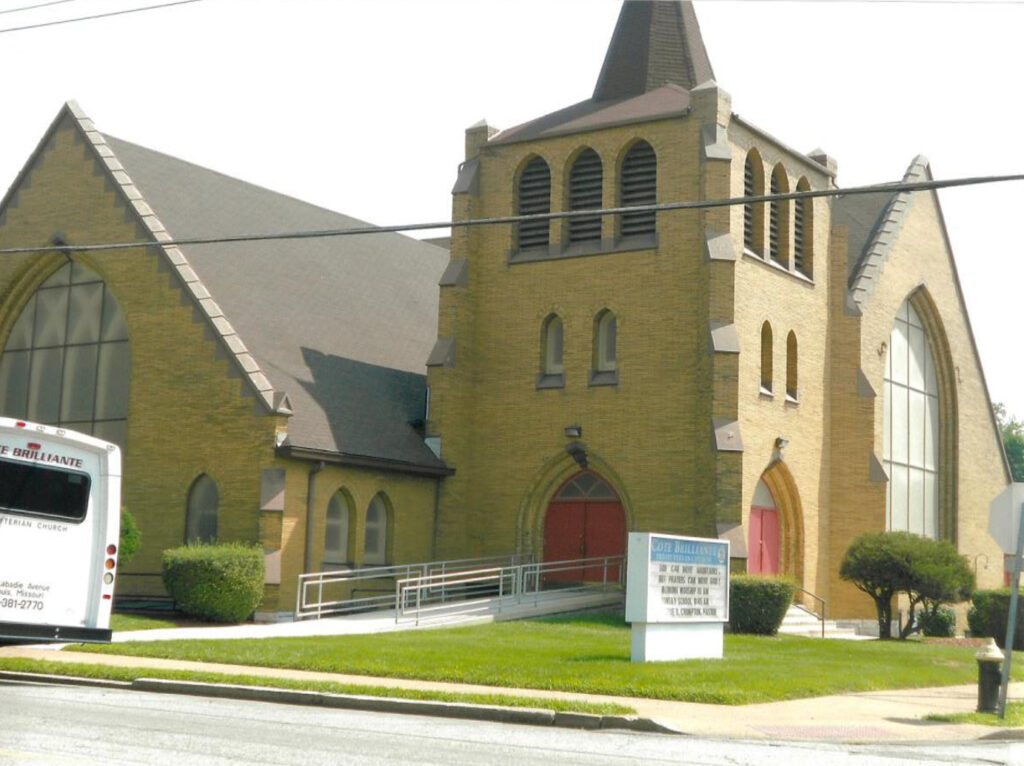 The name of Cote Brilliante is derived from the name given to an Indian Mound that was located at what is now the corner of Dr. Martin Luther King Drive and Kingshighway Blvd. It was called the “Shining Hill” – when translated in the French language, this name is called, “Cote Brilliante”. It is assumed that the French translation was chosen because of the French residents in the area. The entire area surrounding this mound was known as the Cote Brilliante District. Landowners named their tracts of land, for themselves, such as Labadie, Maffitt, and Pendleton – and at other times, for environmental conditions such as “Elmbank” for elm trees that lined the banks of a stream that ran through an orchard and surrounding areas. Cote Brilliante was built over this stream, which accounts for the periodic flooding of the basement for 59 years during times of heavy rains. In 1853, Charles Gibson, a lawyer, politician, and statesman, named a mile tract of land “Cote Brilliante” after the district’s name and Cote Brilliante Presbyterian Church is thought to have evolved from an interdenominational mission school and chapel which were located on the Cote Brilliante Tract. As the neighborhood increased, more and more persons requested a formal church organization, and voted in favor of a Presbyterian church. The St. Louis Presbytery organized the new church on September 29, 1885. There were approximately forty-five charter members. Groundbreaking for a church building occurred in 1894. At the time of construction, it was considered one of the most handsome structures in the area. The new church ministered to a Caucasian membership. It grew and prospered for many years; but in the late 1940s and early 1950s, signs of decline began to appear. The cause for this decline was attributed to an outgrowth of housing laws enacted by local communities. These laws voided the practice of segregation in educational institutions and denied the validity of Restricted Covenants, which denied ownershi 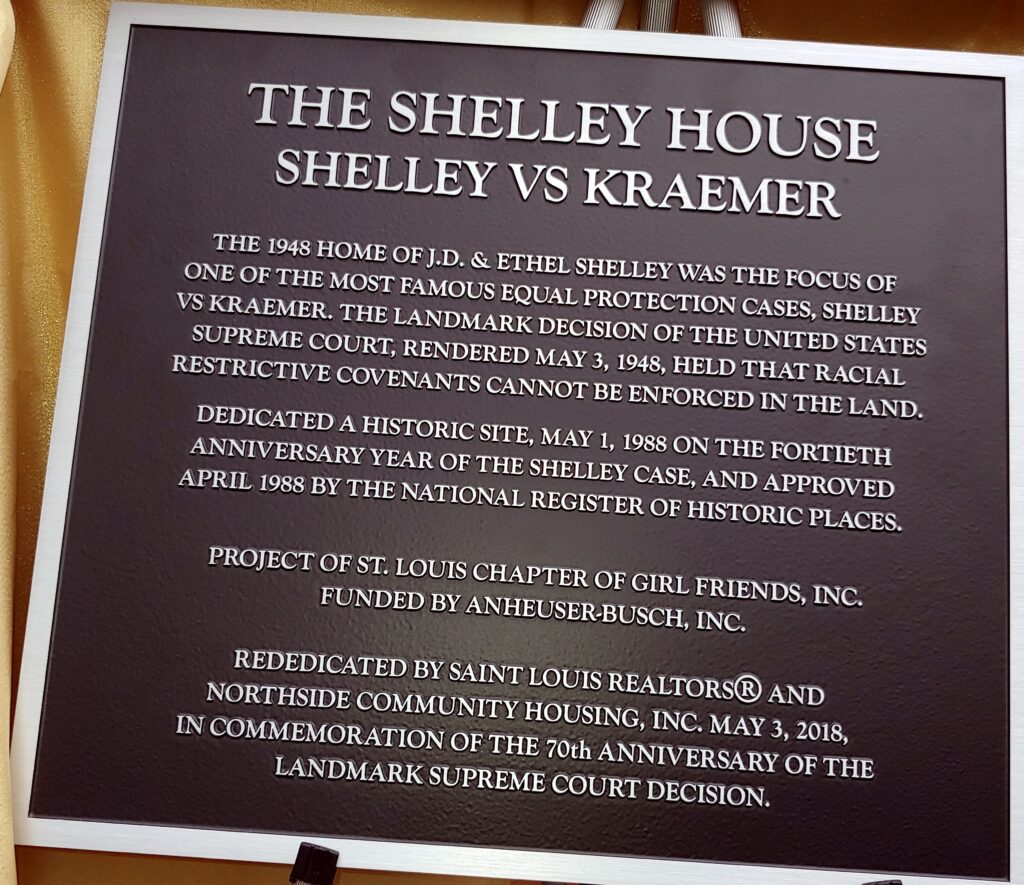 p of housing in certain areas to minorities. The case of Shelly vs Kraemer argued in the Supreme Court had a significant impact on Cote Brilliante. (see Note 1)

African Americans began to move into the neighborhood from other parts of the city. The Cote Brilliante Elementary School was designated as a school for African Americans and other changes were made in the community to accommodate the changing population. Despite a continuing decline in the church membership, no effort was made by the church to minister to the new neighbors. The congregation sought to sell the building and move the congregation. They also considered combining with other white congregations. Eventually the members began to sell their homes and move to the suburbs - abandoning the church. During this period, the Presbytery retained jurisdiction over the church and its properties. It stipulated that it be re-opened as a mission for African Americans and that the name “Cote Brilliante” be retained. After much discussion, the disgruntled congregation members chose to leave the church and the last communion was on May 27, 1956. A committee was formed to search for a new leader. Initially efforts were not successful but after inquiries were made to Johnson C. Smith Seminary, they received a recommendation of an alumnus who pastored a church in Raleigh, North Carolina. His name was William G. Gillespie. The Committee met with Reverend Gillespie and afterwards extended to him a “Call” as “Stated Supply“ of Cote Brilliante Presbyterian Church.

Reverend Gillespie accepted the “Call” and arrived in St. Louis on August 1, 1956 to begin his duties. There was no fanfare upon his arrival; he had no friends or relatives to greet him, no place to live, and no one from the Presbytery to assist him. He only had a key to the front door of the church. His family was forced to return to their home in Knoxville, Tennessee, to await a vacancy in the church manse that had been rented to others. His furniture was stored in the church sanctuary and the Pastor’s study. He registered for a room at the Northside YMCA. The church had been closed during a long, hot summer. It was surrounded with tall grass and weeds. The interior was shabby and in disrepair and water covered the basement floor. Reverend Gillespie realized he had assumed a tremendous task. Thoughts of leaving the city went through his mind. With encouragement from his wife, he decided to face the challenge before him. At first, Pastor Gillespie tackled maintenance problems and other necessities alone. He was the janitor, the groundskeeper, the secretary, the mechanic, as well as the preacher. Reverend Gillespie prepared brochures which informed the community of the programs in the church and gave information about himself and his family. He placed a sign on the lawn and an article in the local newspaper announcing the reopening of the church. He walked the streets knocking on doors inviting neighbors to attend his first worship service scheduled for September 16, 1956. Eighty-nine neighbors responded, of which three joined the church, at that first service. This was the beginning of the Reorganized Cote Brilliante Presbyterian Church.

On December 22, 1957 Reverend Gillespie was officially called as Pastor. His installation service occurred on January 19, 1958. Reverend Dr. William Gillespie was known and respected throughout the country. Tapes of his sermons were in constant demand. His sermon, “It Is Enough” was one of the 21 selected and included in an anthology, Black Preaching, Selected Sermons in the Presbyterian Tradition, edited by Robert T. Newbold, Jr. He was elected as the first black Moderator of both the Synod of Missouri and the Presbytery of St. Louis. He was nominated for Moderator of the General Assembly, the highest office of the Presbyterian Church. In 1982 he received the Humanitarian award from the St. Louis Globe Democrat newspaper. Named in his honor is the William G. Gillespie Scholarship Program, The Gillespie Village Senior Residence Building, and the first dormitory on the campus of Harris Stowe State University. Reverend Gillespie served as Pastor of Cote Brilliante for 53 years and retired on November 30, 2009. He passed from this life in June 2011.

After the retirement of Reverend Gillespie, Reverend Dr. Mary Newbern-Williams was called as Designated Pastor of Cote Brilliante on January 1, 2011 and served in this capacity until June of 2013. The current pastor, Reverend Clyde R. Crumpton, began serving in Pastoral leadership as First Responder in June 2013 after the tenure of Reverend Newbern-Williams. He was ordained and installed as Designated Pastor in 2015 and officially installed as Pastor in 2018.

r Crumpton picked up where Reverend Gillespie left off. His spiritual messages based on the Word of God inspires us to continue to develop programs and ministries that speak to the evolving needs of young people as well as senior members of the congregation and community. As Paster Crumpton, emphasized in his message on the 60th Anniversary of Cote Brilliante,

“In addition to a spiritual worship experience, we are now charged with serving as a critical component of the solution for our neighbors. We must build on the legacy by collaborating to support the educational process for our youth, parents, and seniors alike. We must be instrumental in creating businesses that provide jobs, which produce incomes that support families and households. We must be the community partner that leads in the support of the vision of a once again thriving neighborhood of spiritually, physically and financially healthy families, promoting and nurturing a safe wholesome environment. The legacy of Cote Brilliante must continue to replace despair and hopelessness with a future of restored home, bright and inspired with unlimited potential and possibilities.” (Exert from letter delivered at 60th Anniversary)

The Congregation and Session alike have joined hands to strengthen existing programs and to develop new opportunities to serve the communities surrounding our church and around the world.

And the legacy continues……

Sacrament of the Holy Communion:
First Sunday of each month

View Our Calendar
Scroll to Top